“Be our guest! Be our guest!
Put our service to the test
Tie your napkin ’round your neck, cherie
And we’ll provide the rest” – Be Our Guest Lyrics, Beauty and the Beast (c) Disney

Although getting the opportunity to dine at Be Our Guest Restaurant as part of a sneak preview came as a total surprise only recently, I have been looking forward to dining in this location since Disney made the 2009 announcement that New Fantasyland was going to be built.  Beauty and the Beast and the Little Mermaid played an important role in my childhood and having the opportunity to be completely immersed in these worlds, even as an adult, is so special.  I had a chance to visit the area a couple of times in October during some unannounced “dress rehearsals” of the area and I was absolutely astounded.  The level of detail that Imagineers included in the execution of this expansion of the Magic Kingdom is really beyond words.  This, of course, made me even more excited to get my chance to be a guest in the Beast’s castle.  Luckily, I made reservations to dine on Monday, October 19th (the first official day of dining reservations) and patiently waited my turn. 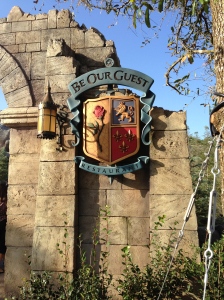 A shot of the entrance I grabbed during an October visit

Then, I got the surprise of a lifetime – my Mom called a few weeks ago to tell me that she had entered for an opportunity to attend a special preview event at Be Our Guest and was selected to attend.  Better yet, she was able to bring a guest and I was the natural choice.  Although this was just two days ahead of my reservation, I couldn’t have been more excited anyway.

In past visits, we were able to cross the ominous bridge and tour the restaurant lobby and fast-casual ordering area (at lunch, the restaurant is transformed into a fast-casual restaurant concept where you order your food from digital ordering kiosks and it is later delivered to your table).  The building and surrounding areas are absolutely beautiful and incorporate recognizable elements from the film (with details like gargoyles, creatures, and minotaurs that adorn various areas of the building).

Here area a few photos from past trips:

As you cross the bridge, gargoyles stand watch over the Master’s castle on the hill

Charles and I with the majestic creatures that guard the door 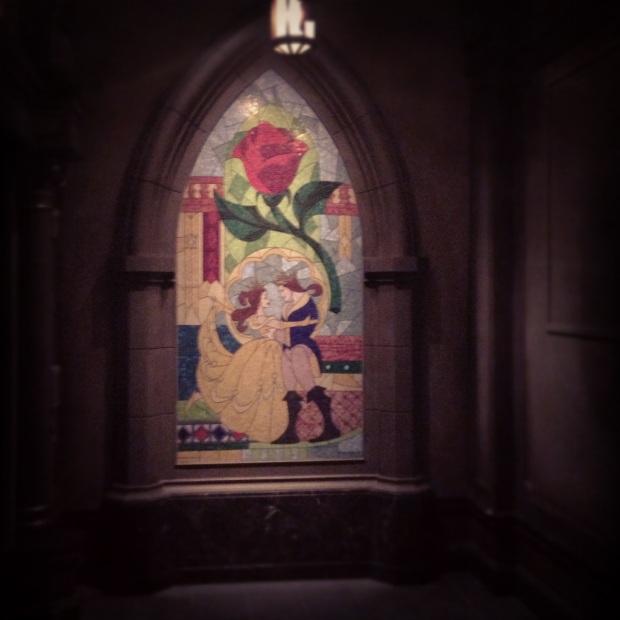 Saturday arrived before I knew it and I was hurrying to get ready for the big night.  Since dining in the Beast’s castle is quite an honor, I definitely wanted to dress up for the occasion. 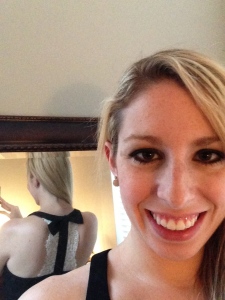 I love this dress!

I’ve been waiting to wear this dress from the Lauren Conrad Collection at Kohl’s since I bought it a few weeks ago and this seemed like the perfect time.  I paired it with a black lace blazer (since I am always chilly) and rose gold metallic sandals that are both comfortable and cute.

After rushing to be ready in time, my mom picked me up and we headed for the Magic Kingdom.  After checking in and getting our event credentials, we headed into the park and down Main Street.

This was the first I’ve been in the park since the holiday decorations went up so I was very excited to see them.  The holidays are always an exciting time of year across Walt Disney World and they give Magic Kingdom a new energy.

We had a bit of time before the event started at the restaurant so we stopped to get a picture in front of the castle to commemorate the evening. 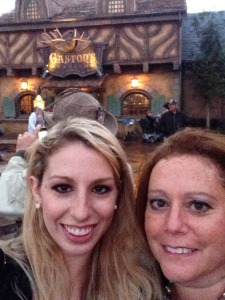 We arrived a bit early to New Fantasyland so we did a bit of exploring before we got in line at the restaurant.  My mom had never seen the area in daylight so we headed over towards Gaston’s Tavern so she could get a new perspective.

By the time we finished a quick sweep through the tavern and Bonjour Village Gifts merchandise location, we decided it best to get in line at the restaurant.

Before too long, we were grouped into tables and led into the restaurant.  Arriving at our table was almost a blur.  There are so many rich, visual details in the room that it’s difficult to take everything in.

We were led to a table near the windows at the back of the ballroom which was a perfect location to take everything in.  We had a close up view of the snowfall outside the window and were able to observe the tremendous level of detail.  Frost hugs to the corners of the window panes with increasing intensity as you look closer towards the ground.  Snowfall covers the plants on the castle’s balcony.  It’s just amazing.

We sat at our table and were presented with a special preview menu.  Although the normal restaurant includes a variety of appetizer and entrée options, this preview menu narrowed the choices to 3 appetizers (french onion soup, potato leek soup, or a garden salad) and 3 entrees (pork chops, salmon, or ratatouille.  The normal large array of deserts was also included on the menu.

It’s All in the Details

I could describe all the details to you but only the photos can even come close to doing the ballroom dining room justice.  Feast your eyes…

Napkins are appropriately arranged in a rose shape

The ceiling is an absolute work of art

A closer view of the beautiful snow-covered windows

“And a Dinner Here is Never Second Best”

As a special part of this event, we were charmed when “L’amour Vrais” – an organic fruit punch topped with a lime foam – was served in collectible light up goblets.  I am not a fruit punch person so I refrained from trying the drink but I was definitely charmed by the beautiful glasses.

We placed our orders and waited for the meal to begin.  Dinner rolls were soon brought to our table with salted butter.  Although they were pretty much typical dinner rolls, they were good as always (I am pretty much a bread fiend) so we enjoyed munching on those while we waited for our first course.

A toast to the evening!

The first course soon arrived.  We both ordered the French Onion Soup which had a delicious layer of gruyère cheese melted over bread.  This was one of my favorite parts of the meal. 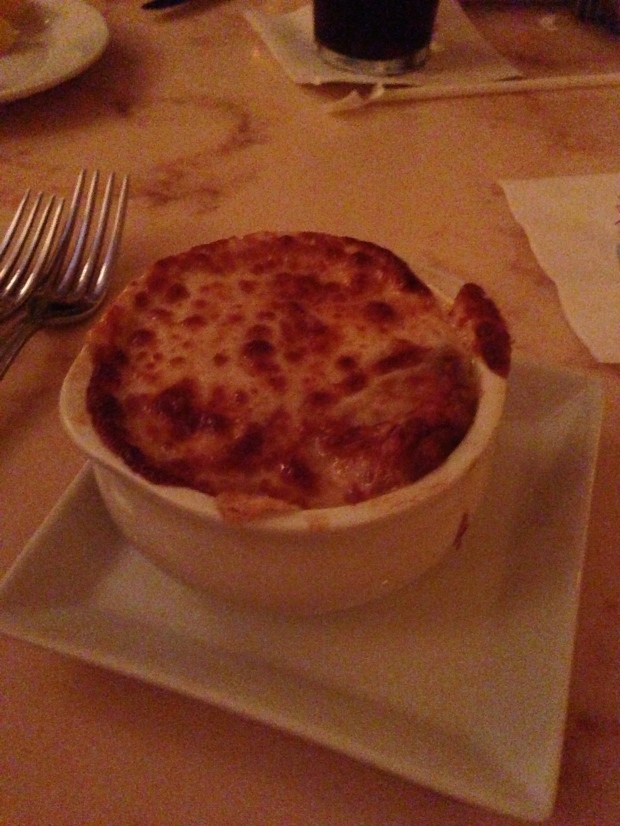 It was soon time for the main course:

Ratatouille (for my Mom):

We both really enjoyed our selections!  As an aside, I had a crack at the full menu last night during my real reservation at Be Our Guest.  This time I went with the Strip Steak and loved it!  It was incredibly well seasoned and I enjoyed every last bite.  It came with pommes frites which were also super delicious.  I would definitely order this during my next visit.  Here’s a peek at that entrée option too (I guess I was too hungry and took a bite before I remembered to snap a photo):

We had almost no room left but it was time for dessert!  Our waitress rolled out a lovely cart of cupcakes and cream puffs and proceeded to plate each of our dessert orders on demand, even adding a chocolate sauce garnish to the plate before placing my triple chocolate cupcake on it. 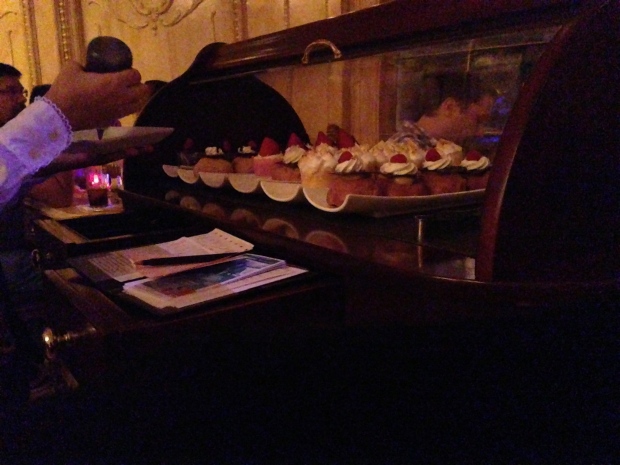 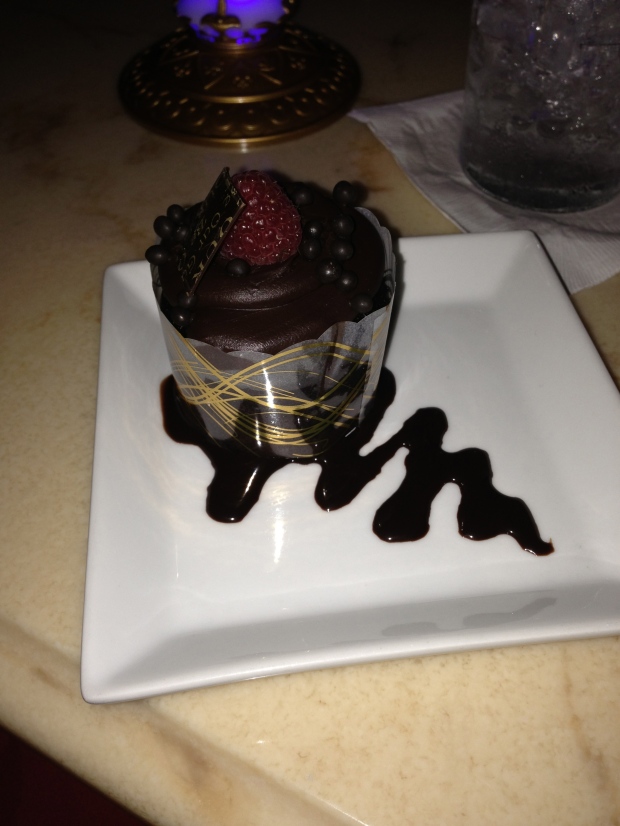 The chocolate garnish on top even said “Be Our Guest” in gold lettering.  C’est magnifique!

Finally, we asked about something I head read about online and long-awaited.  The grey stuff.  You may remember the lyrics to the song Be Our Guest go “try the grey stuff, it’s delicious!  Don’t believe me?  Ask the dishes!”  Well Disney really outdid themselves and actually created the gray stuff.  I won’t ruin the surprise about what exactly it tastes like but I will say, this picky eater was impressed.  it was quite delicious!

We had finished our meal and it was finally time to do some exploring.

Do not go into the West Wing.

Although the West Wing is strictly forbidden in the film, we were free to leave the ballroom and explore it!  It’s really quite a magnificent room.  It is the smallest of the three dining rooms and definitely has a dark, intimate feel.  The lighting is dim and shredded fabric hangs from the walls and ceiling.  Just like in the film, the tattered canopy of a bed hangs from one wall and a torn portrait of the once-handsome prince on another.  Large claw marks leaving tapestries in tatters make it clear that this is the Beast’s quarters. 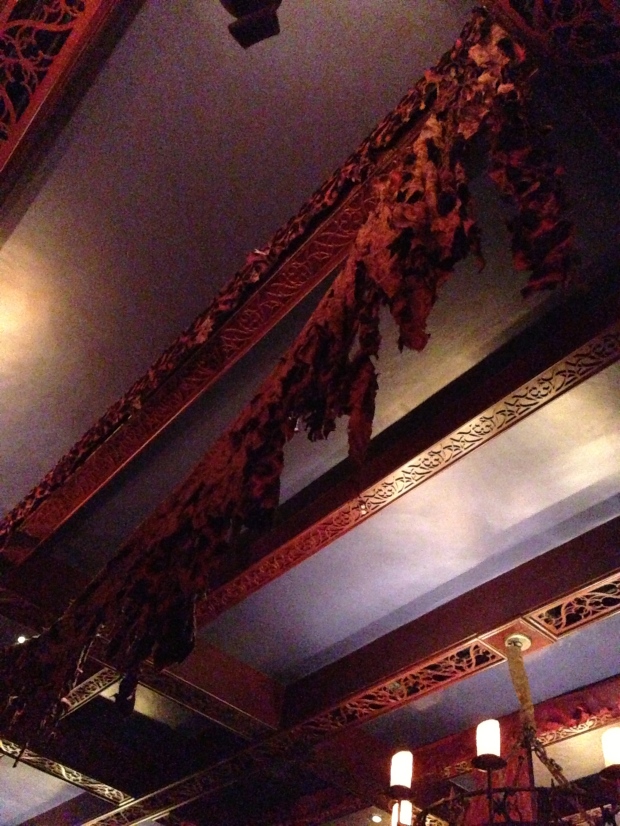 Glowing blue light shines through windows on a balcony, only partly obscured by torn curtains.  On this balcony is a table that contain’s the Beast’s enchanted mirror and rose, glowing rotating magically inside the glass housing that protects it.

Absolutely gorgeous and rich in storytelling detail.  I hope to be able to dine in there one day soon.

The third dining room is called the rose room and is the brightest of the three dining rooms with high ceilings and a giant ornate wooden music box acting as the room’s centerpiece.  So the story goes that this music box was a gift from Maurice to Belle and the Beast (you can actually see plans and early carved models in Maurice’s workshop in Enchanted Tales with Belle).  This was probably my least favorite of the three dining rooms but it is charming nonetheless.  From what I have read, these portraits of Belle, the Beast, and the other beloved characters from the film are supposed to pick up where the story left off.  By that logic, though, it’s a little strange that the Beast and all of the servants have returned to their enchanted forms.  In any case, the portraits on the wall illustrate a variety of fanciful scenes that were not necessarily included in the film.  These images really make you feel as if you are in the private residence of the characters.  Here are a few images:

Posing in front of the giant music box.

I give Be Our Guest two “claws” way up!  The location is absolutely charming and the food is delicious.  I think it will probably be quite some time till I make a reservation only because of the cost and strong demand for reservations but I would definitely come back again.  I still think ‘Ohana or Cape May Cafe give you a better bang for your buck and are more repeatable, but I can definitely see bringing family and friends who visit for a meal here.  I am quite excited to come back and try the “fast casual” format lunch and will definitely try to do that soon.  There’s a Croque Monsieur with my name on it and the French Onion Soup (one of my favorites) and desserts appear on this menu as well.  The level of detail that you see throughout the entire New Fantasyland area definitely extend into this space.

To close, the master has been making some surprise appearances at the restaurant so my mom and I couldn’t pass up the chance for a photo-op!

Have you made a booking to dine in the Master’s castle yet?

What’s Disney dining location could you eat at over and over again?