Well yesterday can definitely be considered a success and a new milestone in my running career…I got my first “hardware.”

Let’s Start from the Beginning

The race was scheduled to start at 7:30 but I was choosing on-site packet pick up which ran till 7:15 according to the information provided by race organizers so I knew it was going to be another early morning unfortunately.

Since I seem to run habitually late for things, I always pad in lots of buffer time.  This meant a 5:30 am wake up call to get our of the house by around 6 am.  After waking up at 5:30 am or earlier for the 2 days prior, I was definitely not excited for this part.  It was a little tough getting moving and we still ran a bit late (I think we hit the car by about 15 or 20 minutes after 5) but we made it out of the house.  Longwood is about 45 minutes away from Celebration so we knew we had plenty of time to get there still.

We arrived, parked the car and picked up my packet.  It was clear from the beginning that this was going to be a relatively small race (It turns out there were around 150 participants) and a lot of high school kids since the race benefitted Lyman High School Athletics.  I knew that this would be very different from my past race experiences (which is always disconcerting) but I made the most of it.

I queued up as close as I could get to the starting line and got my watch ready to go.  People didn’t line up until about 2 minutes before the scheduled start so there wasn’t much of a wait.  We were off…

I started out fast (at least according to my watch – it didn’t feel that fast to me at the time with all that adrenaline pumping) and knew from the start that I was with the leading group of women.  Although I was hanging with the front two women at the beginning, I felt them slowly pulling away.  My initial instinct was to stay with them and not let them get away but I knew this would be a terrible strategy.  I had no clue what sort of pace they were going to maintain so focusing on them instead of my body and the limitations that I know it has would have been a terrible move.  There were 3 women ahead of me in the field and I kept two of them in my view for pretty much the entire race.

We headed down a road, behind a Winn Dixie (scenic right?) and onto another road.  I had looked at the course map in some detail and so I knew approximately where the mile markers should be (plus my watch clued me in).  I realized that there weren’t going to be any mile markers (not to mention clocks on course).  I guess this comes with the territory of a smaller race.

I continued to feel strong which was a good sign.  This is probably the most relaxed I have ever felt at that sort of pace.  It was challenging but I just kept chugging along relatively comfortably.  Somewhere in the second mile they had a makeshift water stop set up which basically had Dixie cups of water sitting on a table.  I guess I am spoiled by runDisney’s volunteer who hand me a nice big cup of water or Powerade as I pass.  I decided to skip it because the distance was so short, I never drink during a 5k distance run, and it would be more trouble than it was worth to even try to grab a cup.

We made another turn and I knew we were entering the last two “segments” (I like to mentally divide lots of my runs into segments to think through my progress).  We headed down some nice flats sections and even downhills and made another turn into a neighborhood which I knew from the map was the last section of the course.  I was starting to lose a little steam but I still felt good and kept pushing.  I knew from my watch we were nearing the end and then we turned the last corner where I could see the finish.

By this point, I had actually passed the #3 girl (although for some reason, I though she was #4) but as we entered the finish line stretch, I heard her coming up behind me.  I pushed and stayed with her almost the whole way down the finish line stretch.  As we neared the finish line, I could feel her starting to pull away as I started to feel like I couldn’t hold her any more.  I mentally let her go and figured “what’s the difference, we’re jockeying for 4th and 5th anyway.”  Little did I know, I was so close to grabbing 3rd female overall.

Could I have pushed it and taken her down?  Maybe, but probably not.  This is the sort of stuff that just makes me crazy and saps some of the joy out of my accomplishments – I have to wonder, no matter how well I did, could I have done just a little bit better?  When final results were posted I saw my official chip time: 23:41 which was definitely a PR (~23 seconds faster than my last 5k time).  I literally lost 3rd female overall (and a trophy I might add) by exactly one second.  How disappointing is that!? 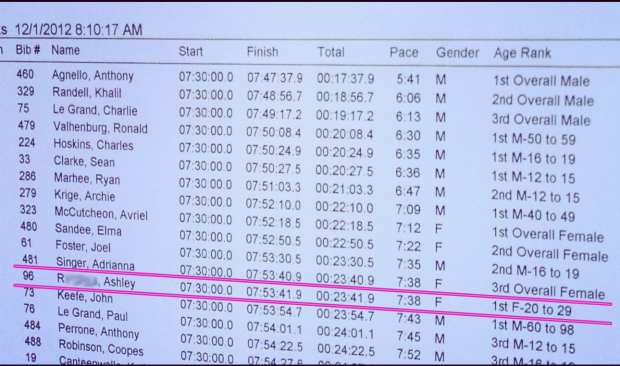 I need to keep things in perspective though.  This race resulted in some great learnings:

All in all, this was a great experience and I am glad I did it.  I think I am going to try to sign up for a 5k every month or so.  This will allow me to continue to gather these learnings (even in races where I have little chance of even placing in my age group).  I think I will thank myself eventually for doing so.

This turned out to be quite a busy weekend (which I will right about later) but I am definitely exhausted still from the week and everything since.  I guess that’s the mark of a good weekend – a few things crossed off the goals list, “hardware,” and no energy left to spare!

What’s your most memorable race “victory” – whether that’s achieving your own goals, placing, or something else?

How do you gear up to take on something that you are afraid to do?

6 thoughts on “The Results Are In! 2012 Historic Longwood 5k Race Recap”