With the 5th Annual Disney’s Princess Half Marathon Weekend officially kicking off tomorrow morning, this seems like the perfect time to look back and reflect as well as share some of my pre-race thoughts.

Why Princess Is So Important

Disney’s Princess Half Marathon is by far my favorite running event which is for a whole host of reasons.

First of all, I consider the Princess Half to be my “Runniversary” since in 2010, the second Princess Half was my very first half.  At the beginning of January of that year, I got my very first taste of what a Disney race was like when I ended up visiting the Walt Disney World Marathon Weekend Health & Fitness Expo.  I was so inspired by everything I saw I quickly took tot he internet to read more about these races.  While I immediately set my sights on the Disneyland Half Marathon that September, I also just so happened to discover the “Coast to Coast Challenge” that allows you to get a bonus medal when you complete a half or full marathon at Walt Disney World as well as a race at Disneyland in the same calendar year (at that time, the Disneyland Half Marathon was the only race at Disneyland).  With the 2010 Princess Half Marathon still 8 weeks away and open for registration, I decided to bite the bullet and sign up.  First of all, I think this demonstrates the crazy growth of the Disney races since I can’t remember the last time a race was still open for registration that close to race day.  Second of all, I think I was a little bit crazy to take on the race with just 8 weeks to prepare.  I wasn’t running virtually at all at that point but hey, I just wouldn’t be me if I didn’t take on a crazy challenge every now and then.

I remember my first real training run like it was yesterday.  It was extremely cold and I thought I had to wake up and head out so early that is was still dark outside.  I layered up and headed out.  Running through the street lamp light with my nose running from the cold, I got my first taste of the sacrifice being a runner requires.  It’s amazing to think of how far I have come since then.  During those early runs, I had really old Nike shoes that probably were not really intended for a runner, I wore cotton shorts and shirts and knew basically nothing about running.  I didn’t have any sort of running watch but used my cell phone (held in my hand at the time) to measure out my runs.  As I started to prepare, I started to learn.  I went to Fleet Feet and got a decent pair of running shoes right away.  They determined that I over pronated and needed a stability shoe.  I don’t know what the heck my shoes were but I can pretty much guarantee they were not a stability shoe.

Anyway, fast forward 7 weeks.  I built my long runs up to a distance of 8 miles and I was running a 2-3 times a week.  At this point, I still wasn’t really enjoying running per se so it was a struggle to get out there some days.  Even my 8 mile run required a mix of running and walking to get through it.  Also complicating matters at the time, I went through an emotionally difficult break up about 2 weeks before the race and really lost all motivation to get out there.  I still had my eye on the prize but I felt so emotionally drained that I just didn’t have the heart to run.  My mom told me at the time “Don’t let anyone ruin this for you,” and she was right.  I was doing this race for me and I could only rely on myself out there on that course.  By the time race weekend rolled around, I started to feel better and get really excited to be a part of this amazing event weekend. 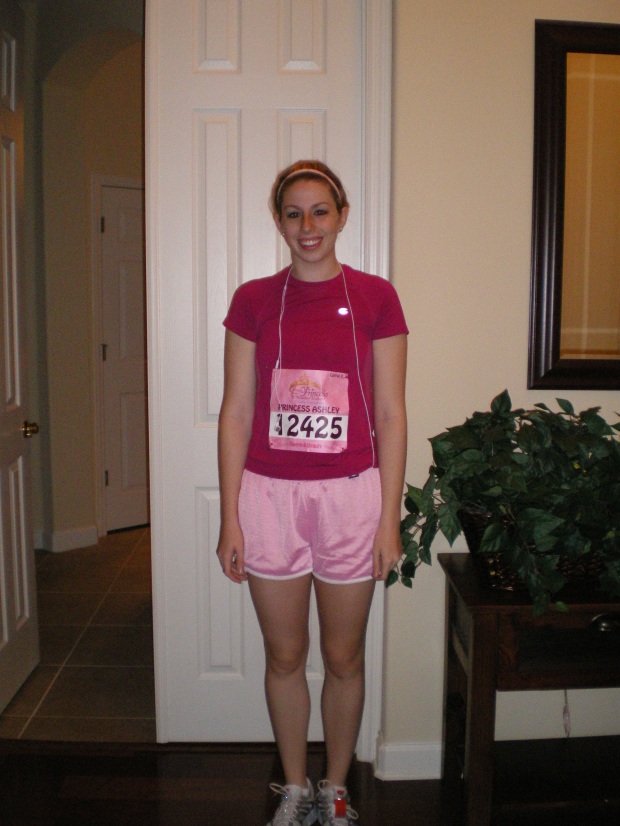 While I was incredibly excited, I was also quite nervous.  I had never done anything like this.  I was honestly afraid of getting swept.  I forged ahead and can honestly say it’s probably the bravest thing I’ve ever done.  While my spectators stayed with me till I headed to the starting line area, I was all by myself till the start.  This further reinforced that I was doing this on my own.  I was in Corral E which was the very last corral that year (the event was closer to 14,000 runners at the time…it has now swelled to like 26,000…wow) and waited patiently for my turn to run.  I had an amazing first race experience.  I remember that it was my goal to run for the first 6 miles without walking and then whatever happened was fine.  Well, the first 6 miles came and went and I still felt great so I just kept going.  Then I started to think about how cool it would be to be able to say “I ran 13.1 miles without walking or stopping.”  Pure determination took over.  I ran the entire race and came in with a respectable first half marathon time of 2:21:37.  Although I had Disneyland on the horizon, I think I knew I was hooked and would continue this passion far beyond that race.  3 years later, I am ready to take on my 4th Princess Half Marathon and 9th half marathon in total.  Wow.  If you asked me in 2010 where I would be in 3 years, I don’t think I would have predicted that I would have this many races under my belt and that I would have improved my time so much.

Between 2010 and 2012, I bought my time down from 2:21:36 to 2:08:53.  Since then, I scored my best time of 1:53:30 at the Tinker Bell Half Marathon last month and I feel like the sky’s the limit for the future.  I may not PR at Princess in 2013, but I am still so proud of how far I’ve come.  I love this event as much now (if not more) than I did on that day in 2010 and this race is a wonderful reminder of why I run.  I run to prove to myself again and again just how strong and brave I am.  I hate taking risks but every run is a risk of its own.  A risk that you will not meet your goal or the expectations you have set for yourself.  However, if there is no risk, there can be no reward.  The reward makes the risk so worth it.

I am a bit concerned about this year’s race.  I know I’ll have a blast, that goes without saying.  I’m just not sure if this will be my best race from a running perspective.

Luckily, my excitement far outweighs my anxiety.  I have a pretty good feeling going into this race so I am hoping that my body with match my brain.  I am so really excited to run in costume.  I love what I pulled together and I can’t wait to unveil it to all of you when race day rolls around.  I am also super excited for the expo.  My excitement always gets notched up about 10 more notches when I visit the expo.

Want to follow my adventures in real-time, follow me on twitter @whyhellodolly!  I can’t wait to share my favorite running adventure of the year with all of you!  Whether I have a good race or a bad race, I know I will have an amazing weekend surrounded by the love of my friends, family, and fellow runners.  Instead of focusing just on PR hopes, I should also keep in mind just how far I have come.  I am so much mentally and physically stronger than I was just 3 years ago.  I’ve also fallen in love twice since; once with my husband and once with running.  I am a lucky girl by any account.

Are you running the Princess Half Marathon?  What are your goals for this race?

One thought on “About to Become Running Royalty…Again”