So the only sort-of resolution I have for myself is to keep my house cleaner and do all the decorating I have been wanting to do.  I don’t really focus that much on New Years as a time to reevaluate my life.  I am fitter than I have ever been, I am happily married, I don’t think I need to go on a diet…so the barrage of New Year-triggered (not to mention annoying) ads featured this time of year are basically lost on me.  My poor little kitty however, well that’s another story.

I have mentioned my cats in passing but here’s the whole story.  I have two cats who I adopted from a local shelter in early 2007.  They were litter mates and were the two bad kittens from the litter who had escaped from a cage on the floor and had to be put together into a traditional stacked cage.  They were so difficult to tell apart at first since they had almost the same coloring.  Here’s a baby picture:

The kitty on the left (who we finally figured out had lighter coloring on her face and white shoes on her front feet) we named Claire.  The kitty on the left was name Kate and had darker face coloring and just white on her front toes.  Over time, they earned new nicknames.  Claire became “the whale” and Kate “the squid.”  I can’t even recall how these names evolved but they have stuck and we almost universally use these bizarre nicknames.  I think they even know them now.  Oops.  Thankfully, having “Claire and Kate” on their charts saves me some embarrassment at vet visits.

Here are my girlies today: 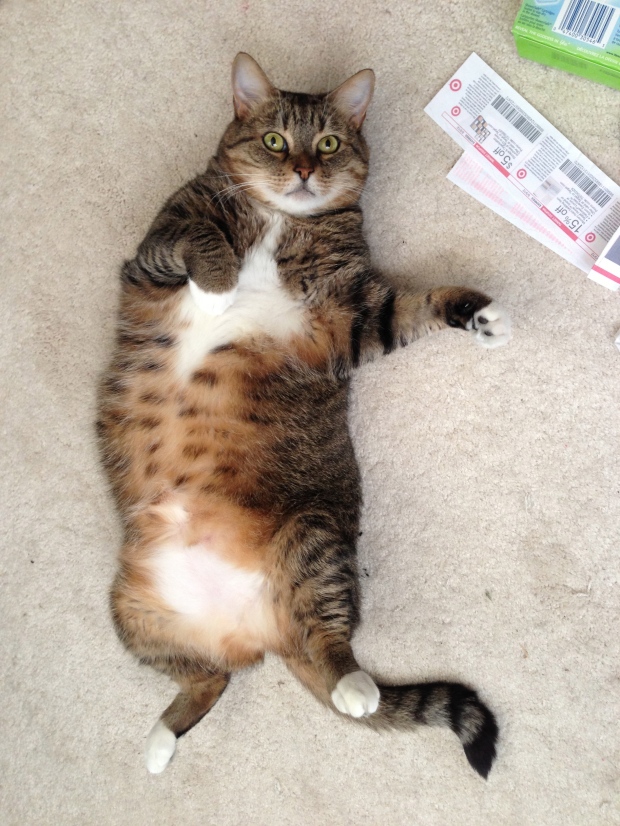 As you can see…how do I put this.  The whale lives up to her name and appears to have some “metabolic challenges.”

Yes, she is a bit overweight.

We’ve Tried Just About Everything

The weight disparity between our cats is a bit perplexing to me.  They are from the same litter and therefore share genetics.  They started out the same size and weight.  They eat the same diet.  I’m just thinking the whale probably eats an unfair share of that diet.

I have known her weight is an issue for quite some time but, despite efforts on my part, have really been unable to do much about it.  When I first got them, we just used a “free feed” method where we left food out all the time and expected them to graze.  This worked will with all the cats I had growing up.  When the whale’s weight gain started to become apparent, we switched over to a weight-management food and a 2 meals per day feeding schedule.

Unfortunately, the squid has had some issues with bladder infections so we had to switch to a urinary health food and ditch the diet kibble (they never seem to eat right when I feed them so it would be virtually impossible to police who is eating what food if I served both types).  The cats are due for a vet visit soon so I guess we will get the final verdict then but I do not think there has been any weight loss going on here.

The reminder card from the vet signaling an upcoming vet visit made me a little bit nervous. I don’t want the whale to get a bad report!  So here’s what we’re doing:

Let’s all wish the Whale luck as she begins her weight loss journey!  Maybe I will cover her “big reveal” here once she’s lost some lbs!

Today I had my second-to-last long run before the Tinker Bell Half Marathon!  I started out just rocking it and probably would continued to if it were for the evil sun!  I maintained between at 8:50 and 9:00 pace for all of my first 5 miles which, if executed on race day, would represent a definite PR.  Like I do just about every 2 months, I decided I could outsmart nature and waited till Noon to leave on my 11 mile long run.  The temperature was cook after all (I think our high was around 70 degrees today).  Although I should know better by now, I sort of forgot that the sun makes it blisteringly hot.  Of course, there was not a cloud in the sky today.  Great.

It was an uphill battle from there.  I ended up amending my normal route to incorporate some fairly shady sections of trails.  It was probably the smartest thing I did all day since I was able to chill out a bit for brief intervals in the shade.  I ended up with an average pace of 9:28 so I can’t be too upset about that given the circumstances.  That would still be a fairly good race pace as its not too much slower than my half marathon PR pace.

I don’t want to jinx myself but I am starting to have a good feeling about Tink!  This will be my view just 2 weeks from tomorrow: 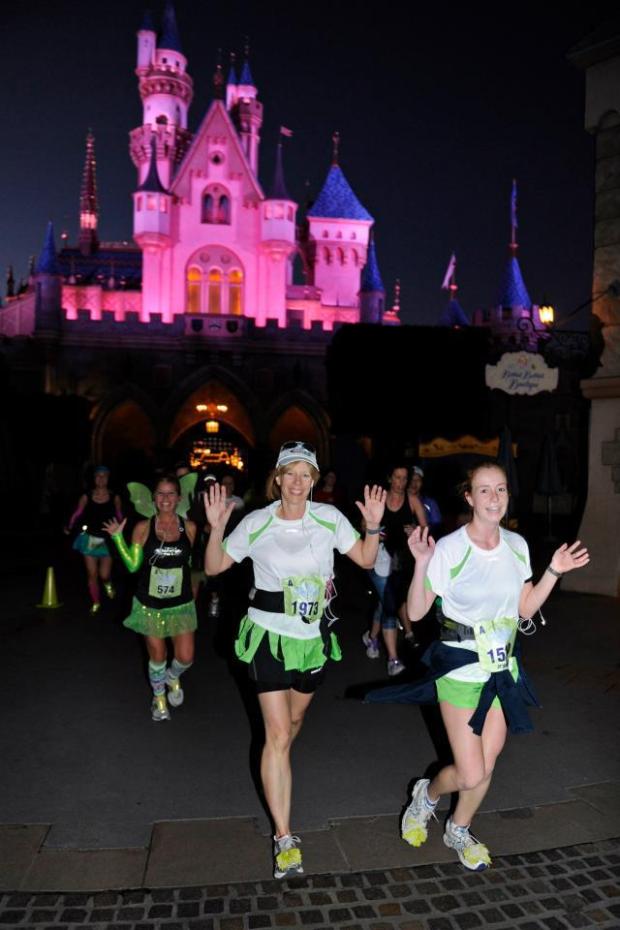 I really need to start thinking about my pre-race preparations.  For instance, what the heck am I going to wear?  It seems like highs in Anaheim are ranging anywhere from mid 50’s to the low 70’s.  Of course, lows (which will probably represent race morning) have typically been in the 40’s.  That’s quite scary for this Florida girl!  I can’t even tell you the last time I ran in 40 degree weather.  Quite possibly never.

I think I am ordering my arm warmers tonight!

Did you make a New Year’s Resolution this year?

How do you prepare to run in (what I consider) cold weather?