So I decided that this race would be my last hard effort of this racing season when I registered.  I will admit, I felt just a little unmotivated about it coming out of a hard effort at the Nike Women’s Half in DC, I am now glad I got one more race in before going into summer mode.

I woke up my poor husband bright and early at 5:30 am on Saturday and we left the house by 6 to head to the lovely Lake Louisa State Park for the first time.  We killed a bit of our buffer time getting Charles coffee at McDonald’s and finding the park (since our directions were a bit off) but we found the park, got directions from a volunteer at the front gate, and headed towards the starting area.

Packet pick up was easy and seamless and I was excited to see that the race bibs were teeny tiny.  Since the weather was forecasted to be hot as hades, I opted for a sports bra and shorts for the first time (and there’s not a whole lot of fabric for pinning in that race ensemble).  This was a great running look for me – I felt fast, confident, and it didn’t get in the way at all.  I also was excited to wear my pretty neon racing flats for the first official time (the Castaway wasn’t a true race so I can’t count it).

Although we ate up some of our buffer, I still had plenty of time to warm up.  I ran probably about half a mile out and back on the course which gave me an opportunity to scope out the flow and elevations.  When I got back to the starting area, I took a quick bathroom break, did a hand full of striders, and made my way over to the start.  I ran into my running group teammate Mike and the start and chatted with him and a few others while we waited for things to get going.  The race started with a loud air horn blast and we were off!

Let me preface all my splits by saying that my watch read out a total race distance of 3.25 instead of 3.1.  IF my watch is really accurate and the course is off, then I had an incredible race which should have been a PR of 22:49.  I guess we’ll never know the truth (till I hopefully replicate that time at my next race) but keep in mind that my spits are probably a bit off from the official race distance.

I started off trying to stay calm, cool, and collected.  I usually tend to go out way too fast which I know I did in this case from my first two quarter mile splits (6:08 and 6:40 pace respectively).  I slowed a little for the 3rd quarter (6:51) and then got a little too slow for the last quarter mile (8:18) so I picked it up a little bit again.  I was still not really feeling winded at all in the first mile and mostly focused on trying to fix my pace issues!

All my splits for this mile were a bit slow – closer to tempo pace.  I was still feeling mostly good here but something else to consider, there was a big climb going into the turn around point on this out and back course.  I continued to focus on staying strong but not over exerting so I could finish strong.  I knew I was behind the first two women from the starting line but wasn’t really focused on catching them.  There wasn’t a whole lot of movement in the pack but I maintained my place with the group of 3 or 4 guys that were just ahead of me.

I started rocking it again in the last full mile.  I knew the end was near and I still felt strong and in control.  This was a great feeling and for once, I was not absolutely dying awaiting the finish line.  The out and back course was great because I knew exactly where we were and had a good mental handle on the end of the race.  It was on a small but steady incline for the first half of the race and thus a small decline on the way back (which probably helped my pace).

The .10 – Somewhere in 6-something pace range

I really had a great kick in this race.  I felt my hips open up and I just blazed down that finish line stretch.  This resulted in my favorite running picture to date snapped by my wonderful husband:

What a great way to end my racing season!  Better yet, I won my age group so I knew I would be getting an award.  I was so thrilled to walk up to the ceremony and see trophies on the table.  I have been just lusting after earning a trophy since I started really racing competitively.  Medals, bags, gift certificates – yes, I have been so lucky to have placed and been awarded some great things but the trophy eluded me.  I have come close a couple of times but never succeeded…until today!

Mike placed in his age group as well so as the only two runners from our team there today, we really cleaned up! 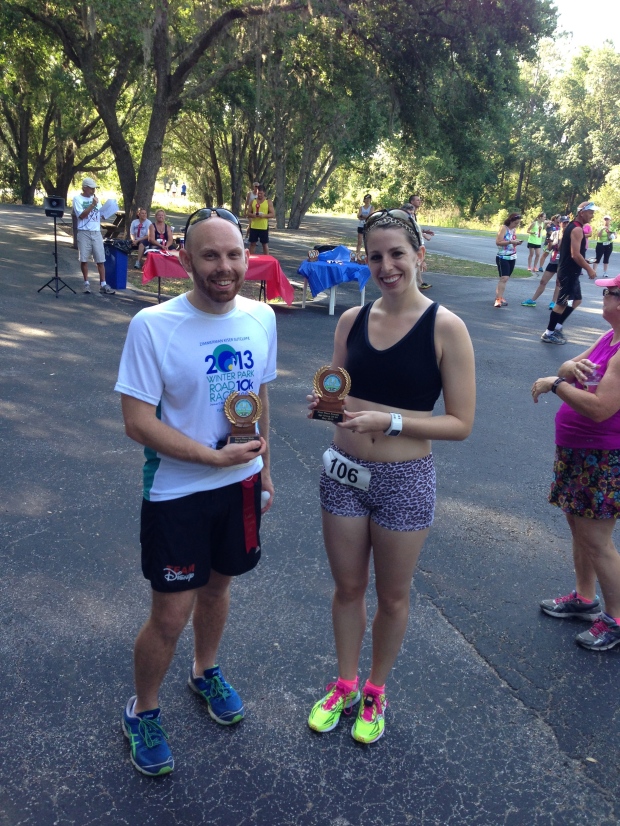 Do you have a racing season?  How do you feel when you reach the end of it?