After a wonderful (and filling) Thanksgiving day has come and gone, I am finally getting around to blog about the events of this long weekend, hooray!

The day started with a relaxing morning of cuddling with the kitties and lounging around in bed long after I should have been up.  Those are the best sort of days though, aren’t they? 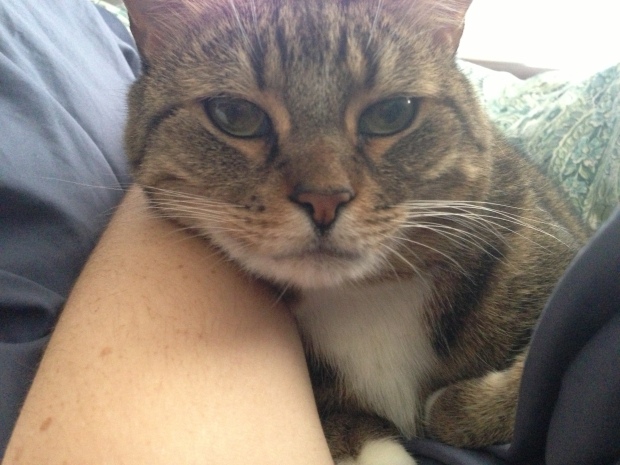 “The Whale” is enjoying her Thanksgiving too!

As I mentioned in my last post, I planned to head to the track with my dad to learn the right way to do some speed work.  Since I live just about 2 miles from a track, we decided running over there would be the perfect warm up.  I ran at a very slow, relaxed pace and my dad followed beside me on his bike.  We took a nice route through the trails in the woods and, as always, it was a pleasure.  We arrived to find, however, that the track was under lock and key.  Bummer!  We decided, “Fartlek it is!” and started to formulate a plan.

If you don’t know, Fartlek is swedish for “speed play” and essentially refers to an unstructured speed work out that involves selecting segments to run at a fast pace and running at a relaxed pace in between.  The structure of the trails through the woods made identifying segments to run fast easy and it was a lot of run.  I would race these sections at or above 5k race pace and then slow in segments in between to allow my heart rate and breathing to return to normal.  I will definitely be mixing this awesome workout in in place of my treadmill interval routine at least some of the time!  Challenging, but fun!

It became clear through this workout that my watch was still not working properly!  I did some tests, doing sections of the workout using “GPS only” and sections using “shoe chip only” to determine which component was causing my instant pace to be so far off.  Well, I deduced it is an issue with the GPS functionality in the watch, not the chip.  When I had the watch on GPS only, I went from a fast paced run to a walk and I was getting readouts in the high 6-minute mile range while I was walking.  Clearly, this is an issue.  So after about an hour on the phone with Nike+ (their support is great but they had all sorts of issues putting my replacement through), this little beauty is on its way:

White wasn’t available when I ordered this watch over a year ago so I was excited to have the option of switching to a new color now.  This will definitely be a more feminine addition to my running attire!

It was soon time to head to my parents house to spend some family time and get ready for dinner.  The usual crew joined us for dinner plus a delightful new addition.  My parents typically host and my grandparents, brother, my mom’s sister, and her daughter always join.  Charles is celebrating his 3rd year sharing our holiday feast (although this was the first year as my husband) and he certainly feels like a part of the family.  We also invited my friend Nan to join us this year and she brought new energy to the evening (and a delicious home-made dish).

We had all the typical foods – turkey, stuffing, mashed potatoes, green been casserole etc. (almost all cooked by my Mother all on her own) – and it was all delicious.  After a dessert of store-bought chocolate cake and pumpkin pie, it was definitely cuddle time with the pups: 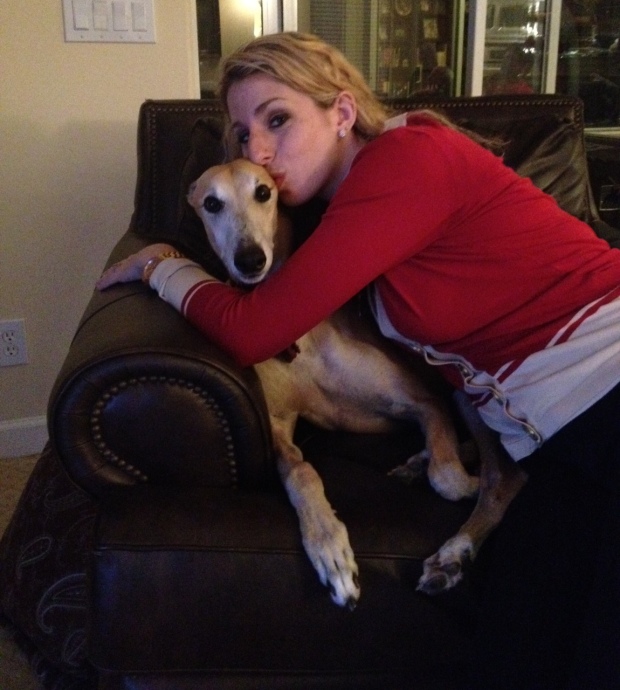 Although we had not plans to hit up the sales starting on Thanksgiving, Nan, Charles, and I got a sudden urge to head into the night and check out Target just after its 9 pm opening.  Although we didn’t have any specific purchases in mind, I just find the energy of Black Friday to be almost intoxicating.  You want to be a part of it and probably end up making some silly impulse purchases as a result.

I grabbed a $10 pajama set and Charles got a couple DVD’s/PS3 games but no killer door busters that we needed to have.  We pretty quickly got in line (which was wrapped around about half of the perimeter of the store) and picked up a few more things as we walked past aisles and aisles of goods.  It was actually an interesting way to shop – I grabbed a few things I’ve been meaning to buy but had forgotten all about.

We headed home and enjoyed a relaxing evening watching TV and not worrying about waking up at any specific time in the morning.  After all, we didn’t have any plans to make any big Black Friday purchases.

This cracks me up every time. (source)

Well, ever since we moved into our house, we have wanted to get a new TV for our living room.  It wasn’t high on the list of initial purchases because I had a perfectly fine TV that was a decent size for the room but knew an upgrade was on the horizon somewhere.  My old TV is about 6 years old and, although it was state of the art at the time, we had some challenges with it.  For starters, it only has 1 HDMI port which was fine when we bought it.  Now though, between Blu-Ray players, our HD Dish programing, etc., 1 HDMI just doesn’t hack it anymore.  We did some research in the ads for the weekend but made no commitment to buying anything.

We woke up around 10 this morning and did a little more online research before heading out to just browse the TV selection.  As we read some cnet reviews and starting browsing the Best Buy ad when we saw this beauty:

Best Buy had a great door buster deal for this 55″ LED 3D TV bundled with a nice little sound system for an amazing price of just over $1,000.  Compared with everything else we had sen advertised, this seemed like a really great deal and cnet seemed to review Panasonic LED TV’s quite highly.  Now, since it was around 10:30 or 11 by the time we decided that this might be the deal for us, the realization set in that we might not be able to find this deal.  Anywhere.  We called some Orlando area stores and all of them had sold out.  Finally, one suggested that we try Lakeland.  We called and they said their inventory system said they had 3 in stock (although that’s not necessarily in real-time) but that they could not hold one for us.  We had to make the 40-minute trek to at least try to get this deal.

We got there and it was pretty much insanity in the parking lot.  I drove so Charles jumped out of the car by the front door to try to go in to claim our TV.  I parked and headed in to find that we snagged the last one!  We felt like Black Friday Pro’s (showing up just before noon and still getting a coveted door buster) but it was probably just dumb luck.  The cashier told us he really thought those TVs were gone so someone must have bailed on one at the last minute or brought one back.  Lucky for us.

It was fairly chaotic in the store but there just-so-happened to be one of these TVs right by the cashier’s desk in the TV section so we were out the door in 10 minutes or less with TV in tow.  Unfortunately, my sedan was not going to accommodate the massive box.  We had given my mom he heads up while we headed the store though so she was at the ready with her SUV in the event that we 1) were able to get the tv and 2) couldn’t fit it in my car.  We killed time till she arrived with my Dad and Brother to help and we were off!  Mission: Accomplished.

We are now enjoying the enormous screen, brilliant display, and rich sound.  What a great way to cap of Thanksgiving – with yet another thing to be Thankful (although we had the important things like family, health, and friends all along).  I think it’s going to be a challenge to get me off my couch this weekend.  I may be glued to this new, glossy screen.  We’re capping off a great day (which included just a little bit more shopping at the Nike Outlet store) by watching The Avengers as a family – mom, dad, my brother and Charles all under our roof.  True bliss.

How did you spend you Black Friday?  Did you snag any great deals?

Did you stay active this Thanksgiving?  Did you do a Turkey Trot or sneak in a pre-turkey workout of your own?

One thought on “Black Friday Pros or Dumb Luck?”