Well this was a great first week of my training plan!  I completed all 27 planned miles (built up from a typical weekly average of around 23 miles for the last year or so) with very little deviation from the plan.  Before I dig into that, let me give you all the detail on my shiny new PR from the St. Patty’s Day Dash & Bash 5k yesterday.

It seems almost impossible to find race that are near my house.  While I don’t mind it that much, Charles hates the 45-60 minutes that it takes to get to these things.  He has an hour long commute to and from work every day during the week so I can hardly blame him.  Plus, 5-something is a tough wake up call to justify on a Saturday.  Anyway, this date of this even worked well to me and I thought it could be fun to do one with a St. Patrick’s Day theme.  So, Apopka it was.

My alarm went off at 5:45 and we planned to leave by 6:15.  We actually left around 6:30 but that’s fine because I always run late and intentionally build in a buffer (punctuality may not be improving but at least I am getting better at outsmarting myself).  We arrived about 3o minutes before the start which gave me just enough time to grab my bib and warm up.

As horrible as this sounds, this is the first time I have actually truly warmed up before a race.  I know, I know.  BAD!  I just always had it in my mind that I would “use up my energy” and couldn’t understand how running extra could make me faster.  Thanks to my new “coach” (aka my Dad) plus a growing understanding of the physiology of running, I was committed to getting a real warm up.  By the time I got my bib and attached the chip to my shoe, I had only about 15 minutes left.  Darn.  I started running laps of the parking lot at a relaxed pace probably for about 10 minutes and then got in a few striders.  Just after I stopped, every started to make their way towards the start.  The starting line was nothing fancy (literally a piece of tape on the ground) but at least the race was chip times!

(source) – from Kon Studio of Photography

I was excited to run into a small group of folks from my running group so we all chatted as we waited for the official start.  The race actually started with a gun start (which is a first for me – a fun little throwback) and we were off.  My A goal for this race was to run a sub 23 for the first but I was ultimately motivated to better my previous PR of 23:41.  My dad and I talked at length about race strategy.  From analyzing my two other really competitive 5ks, the trend was clear – I start too fast.  An issue that plagues many a new runner.  We devised a plan – I set my watch to give me quarter mile splits so I could watch them, see how I was pacing, and course correct.  I wrote my desired split range on my arm as a reminder. 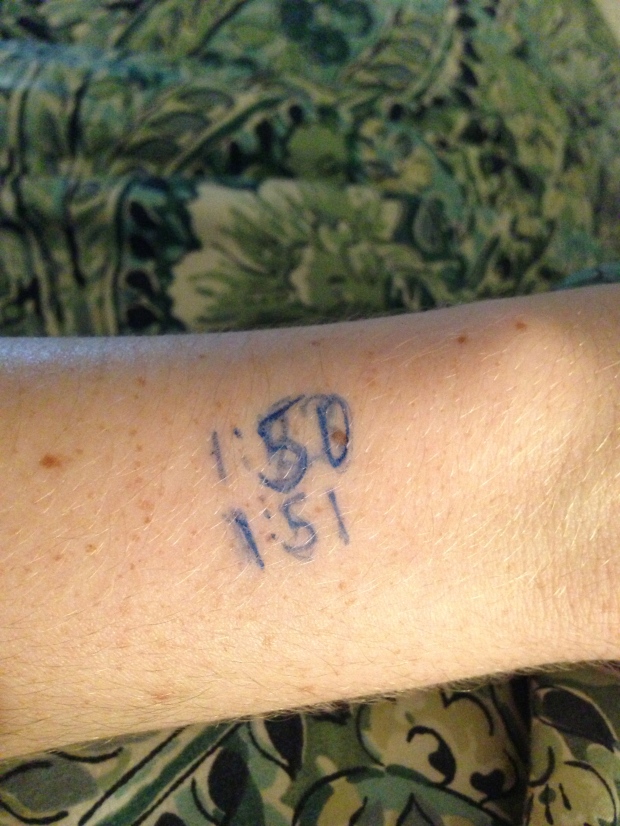 I resisted the urge to be too speedy at the beginning but it’s still tough for me to really get a feel for what my pace is.  Shortly after I settled into my cruise speed, I hear my watch chip signaling my first quarter mile split.  I should also note that, while I had my headphone in and iPod on just in case, I planned for the first time EVER to race primarily without music.  I needed to hear those splits chime on my and I should probably get in the habit of running these shorter distance races without music and focus solely on the running.

I had a few slow splits throughout the race (at or around 2:00) but at least I was able to stop myself from flying out of the gate.  I think I probably would have run the first mile in under 7 minutes if I hadn’t had a few checkpoints and reminders to slow it down.  Here’s the course map, elevation/pace profile, and my quarter mile splits: 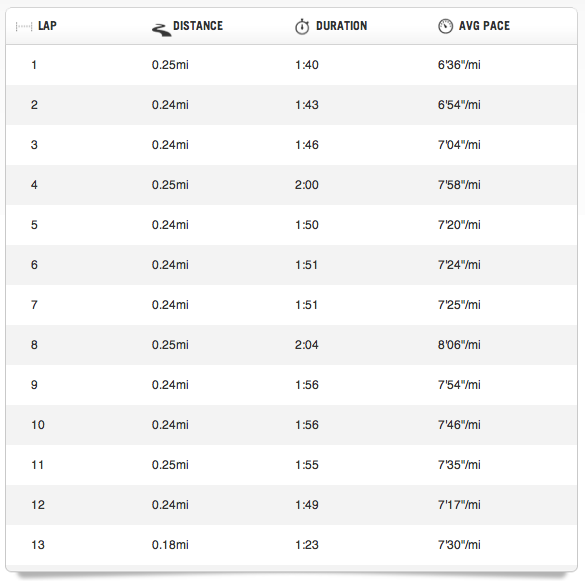 The second “short section” of the course (on either side of the 2 mile marker) turned out to be a great big uphill (by Florida standards anyway) which I was not expecting at all since this was touted as a very flat course.  I had 4 “slow” splits during the race (4, 8-1o) and it’s not surprising that most of those occurred during this hill section.  I kept pressing on and continued to gain on and pass people who had been ahead of me earlier in the race.  That was a great feeling and worth every bit of discipline it took to plan and (at least attempt to) start slower.

Oddly enough, we had to actually cross a non-blocked street to get to the finish line.  Luckily, a cop was stopping cars just long enough for us to cross but it was still a bit crazy.  I head up to the line strong and cruised in as the 4th female with a PR time of 23:28.  My wonderful husband was kind enough to take a video of my finish.  Although it’s hard to see with the sun backlighting everything, here you go:

It was a great race overall.  While I definitely improved my time, I was actually most impressed with how much easier it felt than my last race.  I didn’t feel like I was dying the whole time (a novel concept) and the greatest challenge was really just staying strong when I was fatigued during the last mile.  This was a big confidence booster and I can’t wait to do it again! 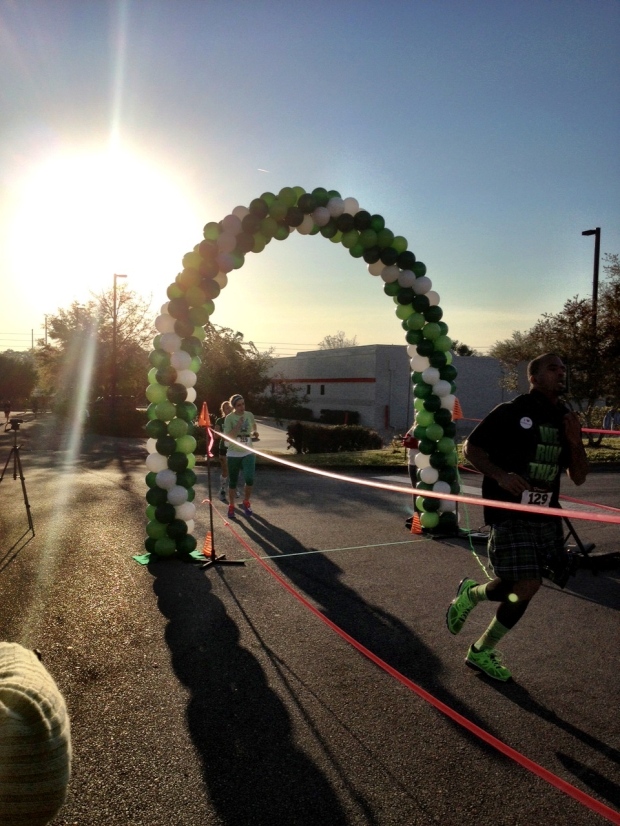 The rest of my running group did wonderfully also!  Almost all of us earned either an overall or age group place and Silvia had a PR as well!  Congratulations guys (here showing off our hard-earned “winnings”): 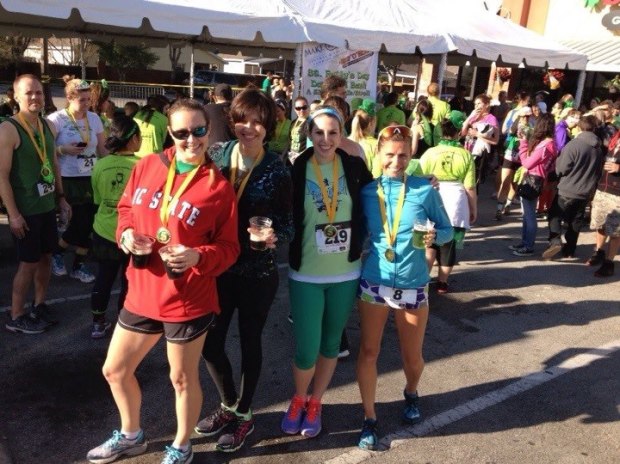 The ladies of the group (also borrowed from Silvia)

The Week in Review

Here’s how I fared in keeping with my training plan this week.  Green means workout went as planned, orange indicates a modification to the plan, red will mean a skip day (hopefully won’t need to use red):

Monday – 3 mile recovery run.  Plus Kazaxe class at the gym.

Tuesday – Track speed work.  Planned to do 1 mile warm up, 8×400 in 1:36 with equal time rest, and 2 mile cool down.  Ended up stopping intervals after 6 as times really started to slip.  Will continue to work on this and build to stable times.

Thursday – Approximated a tempo run during my group run.  This included a .5 mile warm up, then 4 miles at 7:50 tempo pace (it wasn’t perfect but pretty good) and .5 mile cool down.

Sunday – 11 mile long run.  This felt so much better than last week’s where the heat really got to me.  I took it very easy pace-wise after yesterday’s hard effort.  Really good overall.

I am excited to begin week 2 of my training plan!  It should be similar to last week but no race day and the addition of an extra 3 mile recovery run to build to a 30 mile week.  So far so good!

Did you race this weekend?  How did it go?